I was just looking up the name of the road that travels Sante Fe to Abiquiu as could not recall. It is 84 North. I mention this because the way it is described is “the best drive you’ve never heard of”.

This “Cowboy” image was captured in 1991 after a perfect for me workshop at the Santa Fe Photographic Workshops. I had this zippy red rental car. It was just I, my camera, my little car and the big blue skies. I checked out Georgia O’Keefe’s home and studio, as much of it as one is allowed to view, up there on her vast hill expanse. My thought was this gal had found her center because if one had not they would not be out here all by one’s lonesome. Then I wandered Ghost Ranch a place known well by my extended family as a church related retreat center. I think it was enroute back that I came upon this man. He was selling those skulls :0 by the side of the road. He had a teepee up. He was willing to allow my portrait, quite kindly. And that teepee was the perfect background.

This time is so poignant for me, how it marked exactly where I was going. The entire workshop was that. I knew it before I even went. It was the title: The Black and White Spiritual Portrait with Rodney Smith. I had not met Mr. Smith but the subject matter spoke directly to my center. I had been shooting and assisting for a number of years by then so had a sense of the playing field and what did not call me. Mr. Smith did not disappoint. He gave of his time knowledge, presence and quiet humor fully. He is now dead in body. Life on earth, it is moving. A master of light and film and print. This workshop gave name to what I had been seeking, to what I had been called – and to where I then ventured, for the next now over thirty years. “The thing you are seeking, it is also seeking you.” – Rumi

I have always loved this image: a simplicity in form, but rugged too. The hard light, his sunned skin, worn hat, his shadow, the graphic ease, but probably more – my memory of it and his willingness to offer up his presence, even for posterity. 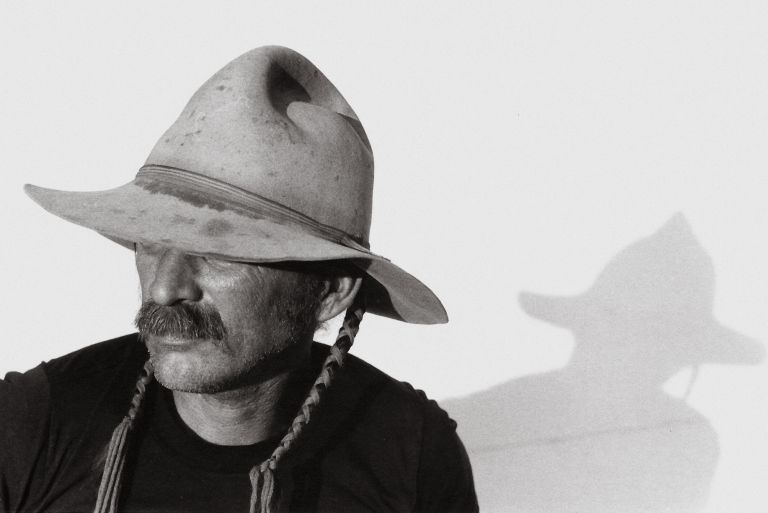